Imagine you just got married and you and your spouse are happily starting out your life together. However, you notice your spouse is still communicating with a close friend of the opposite gender that he had before you were married. While you know nothing is going on, you can’t help but feel ill at ease. It makes you a little anxious and you realize you’re not comfortable with it. Why is that? Read on to find out how harmful such outside relationships can be:

Close Friendships Are Not Appropriate 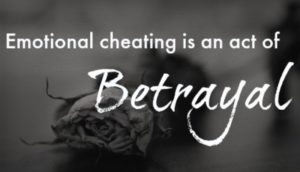 In any close friendship, you share thoughts, hopes, feelings, and emotions with that person. There is an old saying that says “Don’t water the neighbor’s grass, use it on your own to make it green.” Most people who have engaged in an inappropriate emotional relationship with a member of the opposite sex confess that they confide more of themselves to that other person than to their spouse. In almost every case, had they shared more of themselves with their partner, the marriage would have been strengthened and improved. Instead, it is left to wither, leading to a cycle of feeling unfulfilled in the marriage which leads to engaging inappropriately with a member of the opposite sex, which leads to the marriage feeling even more negative, and on and on.

Engaging in intimate emotional interaction with someone of the opposite sex brings the risk developing romantic feelings for him or her. Sharing emotions with someone other than your spouse is not only dangerous, as it can lead to sexual infidelity it is extremely hurtful for your spouse who deserves to be the one you’re confiding in. A couple should realize that it is their well nurtured emotional connection that plays a powerful role in creating a warm and satisfying physical connection. It is easy for a partner to get confused, feeling that they have a connection with a person outside of the marriage in which they feel understood and accepted. They don’t consider that such a relationship does not have to deal with financial issues, parenting problems, tensions with in-laws and other distractions that are common in a committed marriage relationship, and that if they take the time to share and problem solve with their spouse, the relationship will grow into something that is unattainable outside of the marriage.

Having a close friendship with someone of the opposite sex is not worth the risk. Even if you’re not attracted to the person or you think you’re strong enough to never let anything happen, don’t put yourself at risk. Most affairs, emotional and physical, start out with two people who were “just friends” that, when confiding in each other about personal things, grew to care more for each other than was appropriate. And what’s the natural next step when you develop feelings for someone? Physical affection.

Co-Worker Relationships Are Appropriate Within Reason

Obviously you’re going to have to work with members of the opposite sex when you’re at work and that’s completely normal and fine. However, you still need to set boundaries. Do you need to have a business “meeting” at dinner that night with just the two of you? No. Should you work on a project outside of work or after hours just you two? No. It may seem extreme to not allow such interactions, but completely avoiding the situation keeps you from putting yourself in compromising situations.

Be self-aware. Do you find yourself subtly flirting with a co-worker? While it may feel harmless, it’s dangerous all the same. Subtle flirtations can lead to emotional connections, and that’s when your red flags should go up. Think about it: When you start liking someone and begin to date, it always starts out with fun flirtations that, if reciprocated, attract you to that person. Just because you’re married doesn’t mean you can’t still feel attraction—that’s exactly why having these other relationships can be dangerous.

Sometimes situations with the opposite sex arise that are out of your control. Just state your boundaries to whoever you might be in this uncomfortable situation with and make sure you’re transparent with your spouse. When everything is in the open, you won’t risk wanting to hide a relationship. (continued in Part 2)

What Is and Isn’t Appropriate When it Comes to Opposite Sex Relationships...
Scroll to top